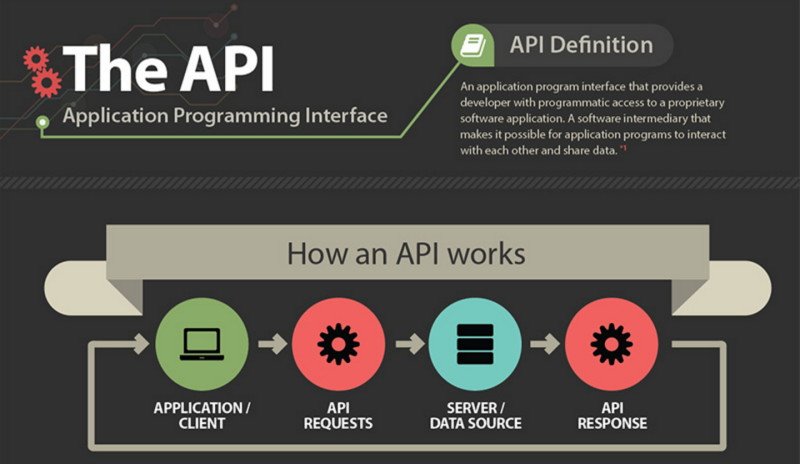 Right now, developers are working with Google’s Android Auto API to integrate messaging and control audio inside of Google’s driverless car. Visa is attempting to be everywhere you are by opening up their API for increased financial accessibility. And a few industrious hackers have even reverse engineered the private Tinder API to go on more dates.

APIs, they’re everywhere and unless you live off the grid or on a private island with no cell reception, you’ve interacted with an API. This interconnectivity is often a result of API-first design. “APIs are being used in the real world today, from rewards points when buying coffee, to tracking which parking meters are available. The Internet of Things (IoT) is being built on APIs that help dim the lights in your house or have your fridge tell you the sports scores,” says CTO Chris Hood of Jewel Toned.

An API, or application programming interface, is a protocol that allows one application to talk to another application, to put it simply. When you tweet from your phone or get directions to dinner through a Google map embedded in a restaurant’s website, you are able to do this because someone has written an API that tells these entities how to interact. APIs work behind almost every device and technology we use to bring us a seamless online experience between web and device.

A great API is dynamic. How? In a Google Tech Talk by Josh Bloch, he says, “Good programming is inherently modular and these intermodular boundaries are themselves APIs. Good APIs tend to get reused.”

In this way, these modules of code, or APIs, serve as building blocks. These building blocks can do many things. They can open a door to a section of code that allows a developer to integrate his or her application or they can be reused in the future in a different manner to meet an unforeseen need of a business.

When an API is built into every layer of an application, it makes it easier to add new functionality and connect with new features, allowing the platform to scale with businesses as they grow.

When people collaborate, good things can happen. This goes double for developers. A developer-friendly API will have many different aspects that make it easy to use, but it should have good documentation, an idea that’s easy to explain and it should give developers the building blocks they need to start working.

An API that’s developer-friendly is not just helpful for the developer — it creates a mutually beneficial situation. According to Tim Nguyen, co-founder and CEO of BeSmartee, “[APIs] allow companies who never would have been able to work together to collaborate and offer new experiences and services by leveraging each other’s technologies.”

With an easy-to-use API, you can open up a service or product to the creativity of the people who want to use it. Watch how developers use an API with their application to find new, desirable uses of your product. If an API becomes popular enough among developers, you can create partnerships or bring your platform to a wider audience with API-first design.

APIs allow for a better separation of concerns. Think of how Henry Ford implemented the assembly line in his factories — instead of having several workers construct one automobile at a single station, Ford implemented an assembly line, where each worker on the line had one job and at the end of the line, the automobile was fully constructed. Each worker became an expert in building one section of the automobile but didn’t necessarily know how to build the entire thing. If a worker was injured, their replacement wouldn’t have to be trained to build an entire automobile, only the section that they’d need to focus on.

Much like the production of parts was separated by Ford, the front-end and back-end of a site are separated, with each API module handling one process, or concern. Instead of being tightly coupled together, the modules of the back-end can be tinkered with or fixed without the users on the front-end noticing. API-first design allows for each module of the API to be worked on without affecting the other blocks or overall operation and without interfering with the user experience.

Gartner predicts the technology of the IoT will grow into 26 billion units by 2020 and that’s not including computers, tablets or smartphones. As this network of objects grows, API-first design is a beneficial way for businesses and developers to keep up with this ever-growing presence.

Where Else Can You See Examples of API-First Design?

SmartFile was created with an API-first design mindset. Our file sharing application, which is built on APIs and has 38 API endpoints, makes it a great platform for developers to work with. If you are a developer, you can sign up for a free developer account here.

Our FileHub™ file management platform, which locks down cloud access, provides a single pane view for file activity across desktops, cloud services and file sharing apps, also uses API First Design. The patent-pending file fingerprinting technology can even track files in Google Drive, OneDrive, Dropbox and Box. If you’re interested in FileHub™, you can try out a demo today.

Want to know more about how developers can interact with the FileHub™ API? Grab the spec sheet here.