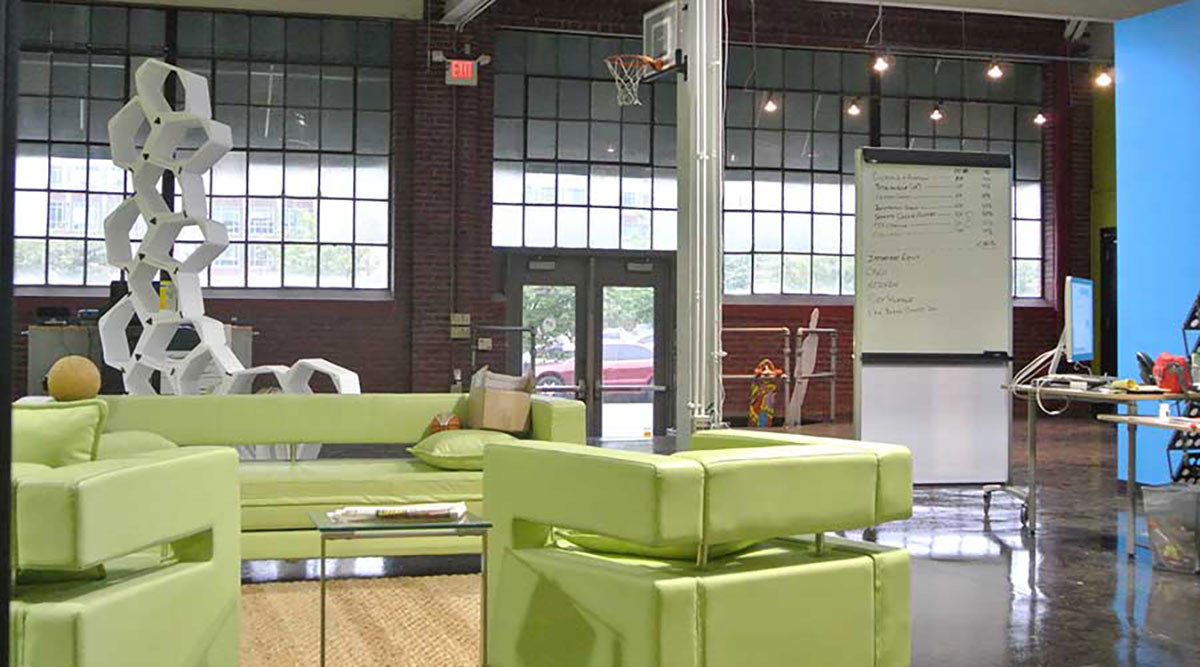 SmartFile was recently included in Launch Pads: Indy’s Coolest Tech Offices in Indianapolis Monthly. It’s a neat office we’ve landed in and plenty of effort went into creating the space.

The SmartFile offices weren’t always in the Stutz. The founding members worked out of their homes and met each other weekly at Panera Bread. When they realized they needed to see each other more than weekly, they moved into a small office in Broad Ripple.

To learn more about the design of our current office, I interviewed SmartFile CEO John Hurley.

Why did you choose to rent space for the SmartFile office in the Stutz?

Really, we just wanted cheap space. Everything was about cheap because we were self-funding. We had to think about the cost of everything, especially when it came to the recurring cost of an office, we wanted to make sure it was economical.

Stutz also already had an open concept. What’s funny is that a lot of the big companies now go “let’s take down the walls and create this cool open space” and want to create that culture that comes with it. But if you’re a self-funded startup, you have that open space out of necessity. You’re starting something, you can’t have walls and you don’t have a lot of money, so what do you do? You go to a warehouse places because they give you that by default, they’re cheaper and most are already converted. That’s why the Stutz was chosen.

Designing and decorating a space doesn’t come cheap either. How did you keep costs down when decorating this space?

One of the things we did to minimize costs was to build a lot of the furniture ourselves. The bar [in the break room] we built ourselves and it was a great team building experience. We use materials that are easy to work with — that’s one of the requirements, easy to work with and cheap. Everything has straight lines and the reason we did that is because you don’t have to create curves. You cut it off and cover up the rough edges.

Another is that we decorated the walls with stuff that would take up a lot of space. We built the quote boards and had a printer print them. The clocks we got at Ikea for $3 a piece. We had customers in all these different countries at the time. So we thought what a great way to show we’re an international company and a cool way to cover up a wall.

Here’s the thing. We’ve grown up where everything is just there. If you want something, you go to the store and buy it. There was a time, not long ago, where if you wanted something, you made it. We try to do that here. Creativity happens when you’re making something yourself, you get this really cool sense like, “I made that.”

How was that mentality reflected in the break room’s wooden wall and the pallet wall in your office?

Those wood planks [on the break room wall] are actually fence posts. They’re dog-eared at the top, but we used the corrugated metal to cover up the dog ears, give it dimension and make it easy.

For my office’s wall, I wanted something that would add a little dimension to the room. Kevin told me he had seen something at his church, where they broke up pallets, carved them all up and threw them on the wall. It’s nothing dramatic, but it turned out really, really well. I think people were a little apprehensive at first. But overall, I was very happy with the outcome.

How did the giant marlin and the horns end up in as decorations in the break room?

That was stuff nobody wanted. There’s an old phone and a parking meter, too. One of our investors caught that fish down in Cabo San Lucas. That’s a real fish. He moved from one house to the other and his wife said they wouldn’t have room for it. So he calls me up and says, “John, I have something that would look great in your office.” He sent me a picture and I said absolutely!

The horns are Papa’s, he won them and his wife wouldn’t let him have those either. So, this has become a collection of what our wives did not want us to have.

What purpose do the plank walls and metal bars in the office serve?

We added the metal poles because we wanted to have a little bit of visual separation. What this became is a great place to lean on. It reminds me of a hitching post. Upstairs, the goal was to create openness but give people privacy. Everybody had privacy on their screen but they didn’t feel like they were enclosed. That’s why we did that.

Who came up with the idea for the basketball hoop?

One of my first houses was in Broad Ripple. I had two roommates and I bought a basketball hoop like this one. That became THE GAME. We’d have 18-20 people over and we were playing basketball until early in the morning because we had a big room for it.

When we walked in upstairs, there was a pole like this [one in the current office] and we had really high ceilings. I don’t know what it was, but we just thought, “we’re putting in a basketball goal,” and that was one of the first things we bought. What we didn’t know at that time was what it would become to our team.

What’s the impression you want people to get when they enter this space?

Creativity. Innovation. Inspiration. It’s the most important for the people who work here, how do they feel? When you walk in that door in the morning, I want you to feel inspired and like you’re part of something.

Want to Work in SmartFile’s Office?

We’re a growing tech company in downtown Indy. We’re looking for talented self-starters who are looking to take charge and find growth opportunities to drive our business. Up for the challenge?