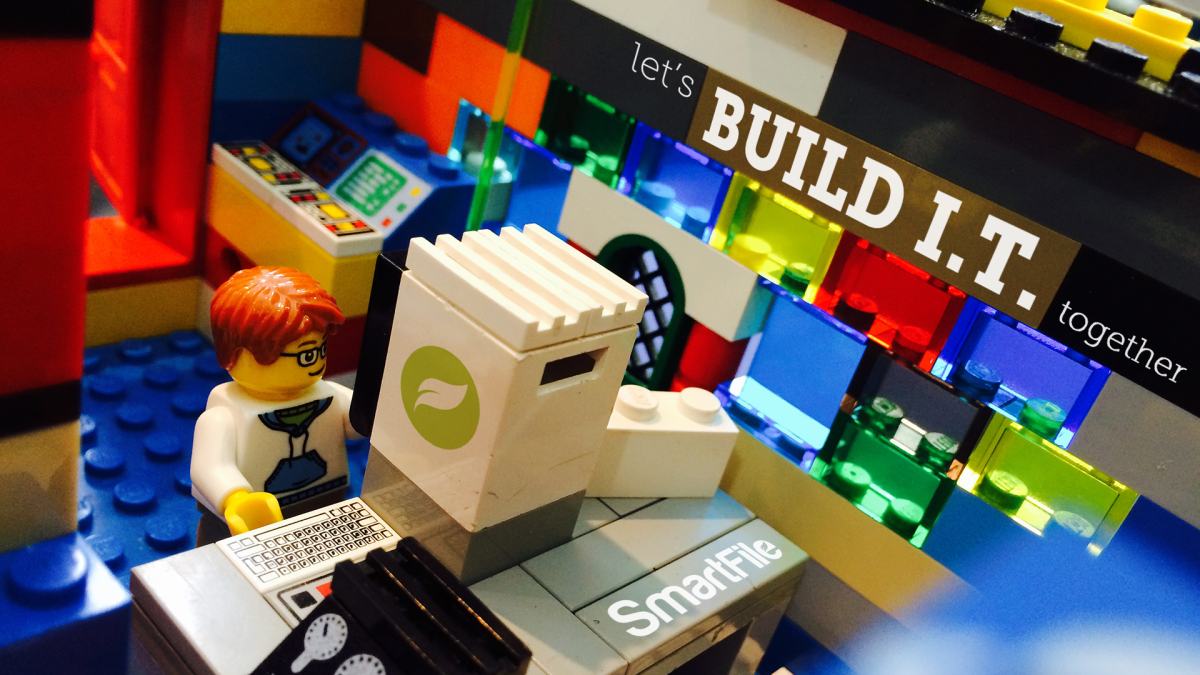 SmartFile has done it. We’ve built a LEGO server! It took us about 2 weeks and thousands of LEGO pieces to complete this masterpiece. Watch the video below to see the entire process broken down into minutes through a time-lapse presentation.

The concept was simple, make a working server out of LEGO. Originally we wanted the server to have rails and be able to be racked into a server cabinet, but we decided to go with a more realistic approach of having it fit on a shelf in a cabinet instead. The hardware itself is from a 2U server but the actual build is designed to be the height of a 4U server. We didn’t know what obstacles we would run into, but we were confident that LEGO bricks and server hardware could work together without too much catastrophe.

The first thing we had to do was take apart our old Dell server. Luckily there are not too many pieces and parts to a server, so it is pretty straightforward. A couple hard drives, some boards, memory, power supply and a processor. We knew that one day we’d be able to repurpose this old hardware, but we never thought the parts inside would be reassembled into an awesome LEGO chassis.

Once all the server pieces were separated, then we could begin the build! Or, at least, we thought it would be that easy. There was a lot of planning with trial and error trying to figure out how everything would fit together. Since the LEGO pieces can only be put together in a specific metric grid, the spacing between parts has to be a little flexible. This is one of the reasons we decided to go with just two hard-drive bays instead of four. Another challenge was deciding whether or not we would need to use screws to help hold down the hardware. We actually were able to engineer everything to be snug and fit without using a single screw or glue (no LEGO pieces were harmed in the assembly process).

After we were confident with the initial build, we decided to make it better. There were so many other great ideas to add more support, rigidity and fun to the server that we decided to tear it down and start over. During the second build, we knew where every part went and we even added LEGO people to the inside.

This fun project is for the 2015 Interop Las Vegas conference. We’ll be showcasing it at our booth (#2350), so stop by if you are in Las Vegas and see our awesome creation. If you are interested in learning more about SmartFile and our enterprise appliance through LEGO pieces, click here.

So. Many. LEGO. Bricks. How did we get such a collection of pieces? Actually, one of our brilliant and talented employees, Jon Klopfer, donated his family’s collection to our cause. This homemade set assembled through years of LEGO collecting made this project very fun for everyone. A HUGE thank you goes to the Klopfer family for their generous contribution.

Let us know what you think! Leave your comments below and feel free to ask us any questions about the build or how we did it all.

Find Out How We Can Build I.T. Together

Do you want more flexibility but need more security and compliance? Whether you need file sharing, monitoring, ftp, storage, automation, user management, integrations or user workflow, we can customize the SmartFile appliance to solve your company’s problem. Let’s create an appliance for your company and build I.T. together.

3 thoughts on “The LEGO Server Build”