What is Containerization and Has It Killed Virtualization?

Virtualization has been around for a while now, but it’s future might be limited. Containerization, per some industry experts, is the next wave. Since containerization isn’t nearly as popular of a term just yet, but it could be exploding here in the near future, you’re probably wondering, “what is containerization?”

We turned to an industry expert experienced with containerization for a lot of help in this article. That expert is Nick Espinosa, the CIO at BSSi2, an IT Consultancy based out of South Barrington IL. They can help you with backup and recovery, virtualization, email and spam protection and more. Check out their website at BSSi2.com.

Containerization is a method of hosting applications, databases and processes that is much more efficient than the traditional virtualization method. It utilizes resources in a clustered or large environment much better than virtualization because it has less layers to load into memory and run.

Containers share a single operating system to publish all applications, databases, processes etc… but they’re also isolated so one container cannot affect the other if there is a health issue.

What’s the Difference Between Virtualization and Containerization?

What we will be seeing in the next few years is a transition from traditional virtualization to containerization, which makes much better use of the physical hardware. So that public facing Windows 2003 server with SQL 2005 and IIS6 can be ported into a container that will better and more effectively run the database securely.

The biggest players in the mid-market right now are Docker and CoreOS’ Rocket. The larger enterprises will be running Kubernetes which is what runs all of Google’s technology platforms. Kubernetes is now entering the market as a full blown product and is generating a lot of press though Docker is by the far the most talked about container system right now. 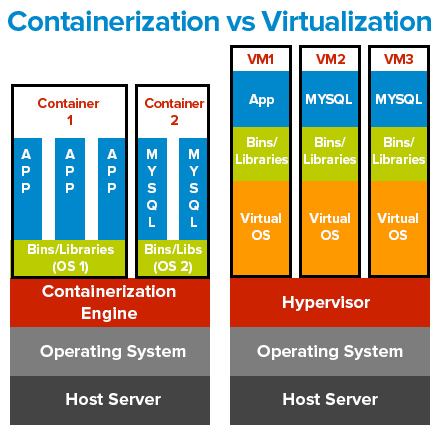 In a virtual environment you have the following items in your stack:

Now consider how a Containerized environment stack will run:

Did you notice the difference? As stated earlier, containers share a single operating system.

By not loading up multiple guest operating systems to accomplish all the various tasks you need, you are saving an enormous of processing power, memory use and even networking bandwidth. Containers are usually very quick and easy to deploy and can be configured to come online and go offline as needed. So, if you have a database that is suddenly being taxed very heavily you can have the system add more containers to pull more resources to ensure QoS for the performance and then when the taxation resides, the excess containers can be killed to free up the resources again.

Why Containerization is Better than Virtualization

What makes this better is that, as I mentioned above, you can rapidly deploy resources to meet your needs and that you actually need less server power to effectively run the applications.

Consider for a moment that this is like constructing a building. If virtualization is a 10 story building then containerization can be a 20 or 30 story building using the exact same amounts of building materials. You can’t build a skyscraper but you can do much more with what you have. Anything that optimizes performance and delivery pushes technology further.

For example, here at BSSi2, we were recently quoting a new client for a desperately needed server setup for their business.

So the question becomes: “Do we reduce the processing power by 40% and get 3 years of service before we start looking at adding more power” or “Do we deploy all 160 cores now and know that we can get 5-6 years before looking into upgrades?”

When you have to buy large amounts of infrastructure, anything that will reduce your costs by 40% or keep the cost the same but double the life expectancy is a major win. The question of containerization versus virtualization was no longer a question.

Thanks again to Nick Espinosa, the CIO at BSSi2, an IT Consultancy based out of South Barrington IL. For their team’s assistance with backup and recovery, virtualization, email and spam protection and more, call 847-551-4626.

Nick Espinosa has helped us out with regards to Windows Server 2003 replacement and end of life as well.